Editorial Note: This is the second article in a series of three by Dr. Tony Maalouf that focus on Old Testament vignettes telling the story of Ishmaelite Arabs in key Biblical contexts. We urge the reader to consider how modern day cultural influences have shaped our collective understanding of the Arab peoples, and perhaps as a result, our posture as the church towards her descendants, both Muslim and Christian. We are confident you will find the context of Ishmael’s birth, Job, and the Song of Solomon an encouraging corrective in today’s politicized landscape of fear towards the peoples of the Middle East.

Any serious historical study of the Middle East will eventually lead the student to contemplate the Old Testament character Job. The oldest book in the Bible, and one oft referred to is likely the story of an Ishmaelite. Job’s historicity is attested by Ezekiel, who places him alongside Noah and Daniel among the righteous biblical characters (Ezek. 28:3). The Arabian flavor of the book of Job stems out of cultural, historical, and literary backgrounds. 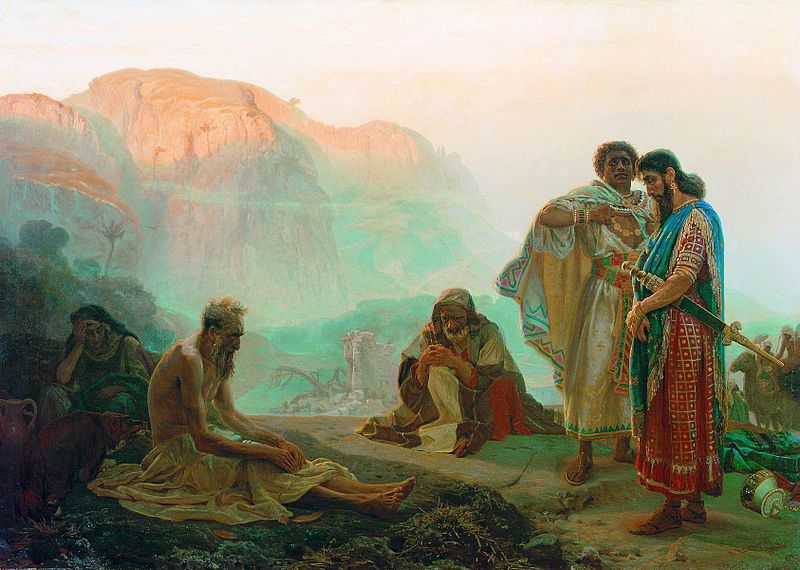 He is described by the author of his book as the greatest among the children of the East (Job 1:3). Though Job is solidly included in the biblical narrative, this automatically puts him outside the Israelite line. It likely places him in the Transjordan, a little beyond the land of Ammon, Moab, and Edom. The expression “children of the East” generally refers to nomadic dwellers of the Syro-Arabian Desert. Although Genesis 29:1 may be interpreted as including Arameans with them, all the rest of biblical references argue, as Pfeiffer notes, that these Easterners “are not Arameans, but Bedawin.” The Egyptian tale of Sinuhe points also to a land of Qedem, which the traveler approached as he moved eastward out of Byblos. As vague as it may sound, this reference likely refers to the Syrian Desert. (Judg. 6:3, 33; 7:12; 8:10; Jer. 49:28; Ezek. 25:4, 10).

The Greek text of the Septuagint adds an appendix to the book of Job (42:17), which is a translation of “the Syriac book.” This appendix reflects an Aramaic tradition assumes several things about this hero. First, the name of Job was first Jobab, who appears in Genesis 36:33 as one of the descendants of Esau from his marriage with Basma the daughter of Ishmael. Second, Job lived in the land of Uz, which this tradition locates “on the borders of Idumea and Arabia.” Third, he married an Arabian woman who gave birth to a son named Ennon. Forth, Job’s father was Zerah and his mother was Bosorras; placing him fifth from Abraham. Fifth, Job’s friend Eliphaz is one of the sons of Esau, King of the Teimanites. Baldad is King of the Shuhaites and Sophar “king of the Minaeans,” which is a south Arabian kingdom.

Objections raised against this tradition are not serious enough to dismiss it as useless, and the identification of Job with Jobab deserves some attention, especially since it does not contradict the internal evidence of the book of Job and other Scriptures. Though this tradition may be possible, it is not accurate in every single detail. For example, mentioning only one son for Job, Ennon, seems to contradict scriptural data (Job 42:13-15). Therefore, the relevance of the book of Job to the study of the early history of the Ishmaelites is reinforced by this tradition, though it does not depend on it.

Great among the people of the East, a righteous man by God’s own testimony and a foundational Old Testament narrative… Job’s story and context deserve careful reflection today as a counter-balance to perspectives on the current Middle Eastern backdrop.

This post is excerpted from Tony Maalouf’s book Arabs in the Shadow of Israel.

One thought on “Old Testament vignettes [2]: Job the Arab”